The Visual Display of Quantitative Information, the first book by renowned statistician Edward Tufte, is a wonderful exploration of what does and does not work in data graphics.

Tufte self-published the book in 1982 but it remains relevant and insightful today. It’s full of examples, of both good and bad instances of data graphics, that Tufte uses to draw out general principles that he suggests “apply to most designs”.

I found one example where I disagreed with Tufte, which I’ll come onto later.

Tufte uses the word “principle” throughout the book. Sometimes, the principles themselves appear as a summary at the end of a chapter, but sometimes they’re buried in the middle.

However, although he takes care to define many of the terms used in the book, Tufte never actually defines what he means by “principle”. And what looks like a statement of principle is not labelled as such.

Insights into graphical design are to be gained, I believe, from theories of what makes for excellence in art, architecture and prose.

What follows is a mixture of the explicit principles and implicit insights I noted on a re-read of the book.

Tufte clearly sets out the first five principles at the end of the book’s first chapter, “Graphical Excellence”:

He provides many examples that follow these principles. And his final point leads into the idea of graphical integrity – that is “telling the truth about data” or, perhaps more aptly, effectively telling the truth with data.

Tufte says “Graphical integrity is more likely to result if these principles are followed”:

There are many shocking examples of clear distortions of data to show what happens when these principles are not followed.

Sadly, I’m sure many more examples have risen to prominence in the 17 years since the book was published.

In a chapter simply called “Data-ink”, Tufte describes “data-ink” itself as

the non-erasable core of a graphic, the non-redundant ink arranged in response to variation in the numbers represented.

This is a fascinating idea.

The book includes an illustration of what data-ink and non-data-ink look like in the book. 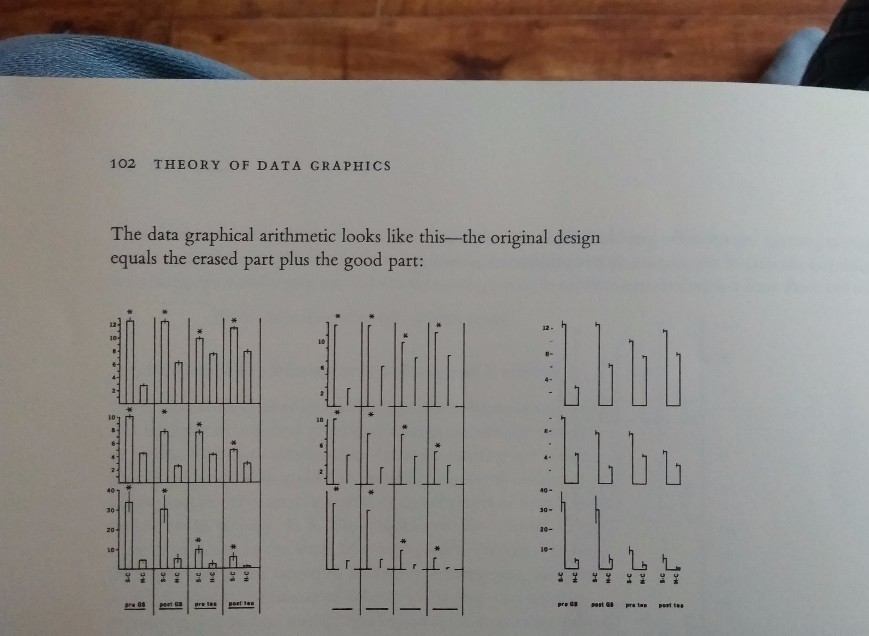 To analyse this, Tufte defines what he calls a “data-ink ratio”: the amount of data-ink divided by “total ink used to print the graphic”.

These days, “ink” might easily be substituted with “pixels”.

Either way, the ratio is about efficiency and reducing clutter, aiding the reader of the data in getting to its meanings more easily.

Five principles appear throughout the chapter, sometimes qualified by the phrase “within reason” – and then again without the qualification at the chapter’s end:

These five points feel much more like guidance or instruction on producing one’s own graphs and charts than the earlier principles or insights which were as much about reading graphs and looking out for misleading presentations of data.

does not tell the viewer anything new. The purpose of the decoration varies […] Regardless of its cause, it is all non-data-ink or redundant data-ink, and it is often chartjunk.

We can infer meaning from the examples he analyses and from the chapter title itself: “Chartjunk: Vibrations, Grids, and Ducks”.

He mentions all three elements of the title in the chapter’s concluding principle:

Forgo [sic] chartjunk, including
moiré vibration,
the grid, and the duck.

You can read more about the terms “moiré vibration”, “the grid”, and “the duck” on Tufte’s webpage about chartjunk, which features excerpts from a few of his books.

Chartjunk is an obvious example of non-data-ink that creators and designers should look for when trying to improve data-ink ratio.

The “data density of a graphic” is equal to the “number of entries in data matrix” divided by the “area of data graphic”.

From this, Tufte then sets out two principles:

By following these, one is able to use the saved space to present several similar types of graphs or charts together, leading to “a powerful and effective graphical design”.

Tufte calls this kind of presentation “small multiples” and he may have been the first to popularise the term.

Where Tufte gets it wrong

Relating to that “less is a bore” rule, there’s just one explicit principle in Tufte’s seventh chapter “Multifunctioning Graphical Elements”:

Mobilize every graphical element, perhaps several times over, to show the data.

There are several good examples of this principle being applied in the chapter. Unfortunately, there’s also an example I find dubious. 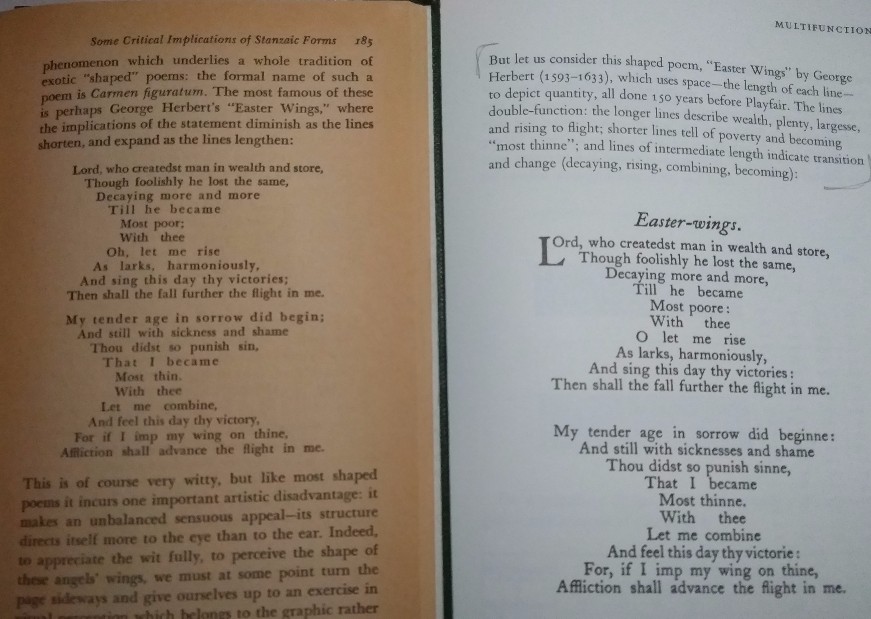 Tufte uses this as another example of how the lines “double function”. Except this is a poem not a visualisation.

For me, this typographical play is a distraction.

Paul Fussell’s Poetic Meter and Poetic Form, another book I continually return to and published eighteen years before Tufte’s, provides some context:

The contribution of line length to meaning is a phenomenon which underlies a whole tradition of exotic “shaped” poems: the formal name of such a poem is Carmen figuratum.

This is of course very witty, but like most shaped poems it incurs one important disadvantage: it makes an unbalanced sensuous appeal—its structure directs itself more to the eye than to the ear.

Its appeal to the eye is clearly the reason Tufte chose to include it in The Visual Display of Quantitative Information – even though there is no underlying quantitative information.

But Fussell even criticises its visual form.

Indeed, to appreciate the wit fully, to perceive the shape of these angels’ wings, we must at some point turn the page sideways and give ourselves up to an exercise in visual perception which belongs to the graphic rather than to the temporal arts.

This need to turn the poem “sideways” or rather ninety degrees actually makes this a poor design, even by Tufte’s standards, as well as a poorly conceived poem.

Perhaps the greatest limitation of shaped poems like [“Easter Wings”] is the scarcity of visual objects which they can imitate: their shapes can reflect the silhouettes of wings, bottles, hourglasses, and altars, but where do we go from there?

Unfortunately, there are probably quite a few places to go from there.

The art of Carmen figuratum is the province perhaps more of the typographer, who works primarily in one sense dimension, than of the poet, who must exactly interfuse two. It is in the delicacy of this joint appeal to eye and ear at once, it is in the perfect harmony of the address to visual and auditory logic at the same time, that any poem achieves its triumphs, and with its triumphs, its permanence.

I agree with the general principle that Tufte articulates in this chapter. But I’d argue it doesn’t apply to poetry, because the lines in poetry are not principally graphical elements. Making them so becomes a distraction akin to chartjunk.

They are also graphically inelegant.

Finally, Tufte does not define “graphical elegance” – that would be difficult, since elegance of any kind is hard to pin down – but claims it “is often found in simplicity of design and complexity of data”.

This is why I think that the poem Easter Wings is also inelegant, even by Tufte’s own standard – it is an overly complex design for relatively simple “data” (the idea of wings).

But Tufte draws out more about complexity of (actual) data by making some points about what attractive displays of statistical information should do.

The context in which such displays should sit is also important however.

With that in mind, Tufte still thinks we ought to be mindful of aspect ratio when it comes to creating graphics wherever they sit. This is evident even in the design of his book, which keeps text to a column about three-fifths of the page but where graphics can take up full-width as needed.

However, this is later qualified by two final points within the chapter.

What excites me most about this book is that, by examining day-to-day technical, specific work – presented across many graphs about many different topics – we discover deeper, human insights about facts, truths and storytelling.

I’d highly recommend getting hold of a copy of The Visual Display of Quantitative Information and other Tufte books, all of which provide useful insights accompanied by a wealth of examples.

In the epilogue, Tufte qualifies all the principles and insights he has set out.

The principles should not be applied rigidly or in a peevish spirit; they are not logically or mathematically certain; and it is better to violate any principle than to place graceless or inelegant marks on paper.

He invites his readers to greet any set of principles with “some skepticism [sic]” – which I’ve done in part by focusing on his example of the poem Easter Wings.

Tufte leaves us with a final insight, the closing words of the book, which seem like a fitting way to conclude:

[…] the task of the designer is to give visual access to the subtle and the difficult—that is,

the revelation of the complex.