I’ve tried lots of habit tracking approaches in the past but, in the last year, I’ve found tracking on paper works best for me.

I started out by looking at bullet journals for inspiration.

According to an article in The New Yorker on bullet journals, digital designer Ryder Carroll was the first to invent the format.

I picked myself up a copy of How to Bullet Plan by Rachel Wilkerson Miller back in January 2018 and was looking to that for inspiration.

I’d already used the format to keep my notes at work short and succinct. I can’t show much of that here for reasons that the notes can be of a sensitive nature. But the basic idea is that each action or piece of information gets its own line, and is formatted in the same way, making them easy to scan and check off. 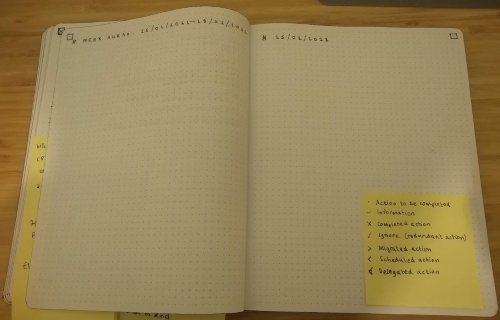 So maintaining productivity with paper is something I’ve gotten used to, even though my work itself all takes place on or at a machine.

There’s something about tracking work offline, physically, that keeps me mindful of what I’m doing – particularly since I stopped going into a physical office space.

So it was perhaps a logical progression to take this approach, which seems to have been successful, and apply it to my own life and personal projects.

You might think this is something I’ve taken up as a result of the Covid-19 lockdowns and restrictions. But I actually started keeping a habit tracker before then, and I gave up during the first lockdown while adjusting to the new reality.

Surprisingly I picked it up again after restrictions eased. I’ve experimented with different formats over the last year.

One format I settled on was taken from a video about habit-tracking by Thomas Frank. 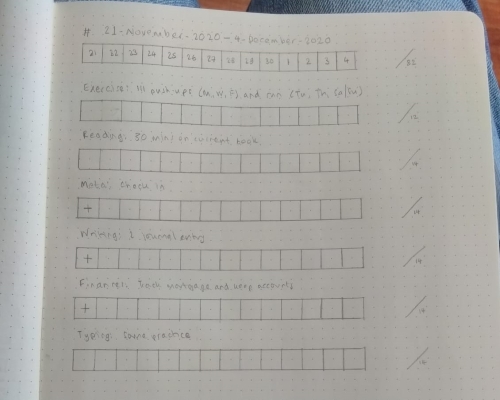 The method he describes in the video is called the “Martin System” (after his co-worker). There were two key ideas I liked about this method: 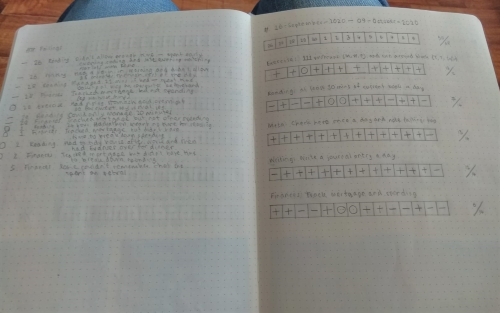 This is really powerful. For my own purposes, I’ve kept each habit-tracking period to exactly fourteen days, even if that means running over into new months. This is something that the video avoids, preferring to split each calendar month in half. But I find it easier to follow the natural patterns of a week, than to try to follow the arbitrary, fluctuating days in a calendar month.

I still do this now. Every fortnight, I create a new spread and look back at the old one deciding if I need to change my habits, or adjust circumstances to allow them to happen.

Sometimes, I’ve abandoned habits because I realised I didn’t really want them in my life.

Sometimes, instead, I’ve broken habits up into smaller, more manageable habits, when I can see that I’m struggling. That way, even if I achieve part of what would have been one habit before, I can still track it rather than writing it off as a failure.

And, sometimes, I make habits more ambitious – for example, by increasing the distance I intend to run on days when I’m doing that.

I’ve experimented with the format since I started, trying different symbols and boxes and even at one point trying waveforms.

Right now, I’m settled on a more compact version. This allows more room in my fortnightly spread for recording failings and reflections. 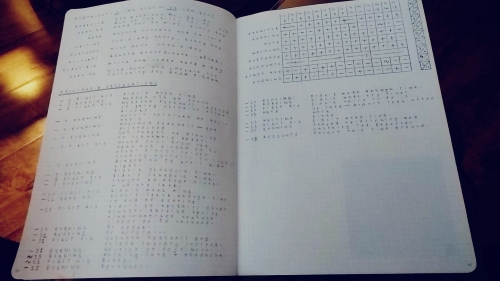 I’ve also replaced the circles that represent circumstantial failure with tildes for neatness. And I’ve started to rate my progress numerically as well so I can more easily compare fortnights. I imagine I’ll develop the format I prefer further.

One thing I’m interested in doing is linking this up to personal quarterly goals. I’m not sure how I’ll link my simple, achievable habits to the stretch goals I have in mind, but that’s perhaps something for another post.