Like a few people interested in writing, technology, and the creative process, I recently bought an AlphaSmart Neo.

The AlphaSmart Neo is a keyboard with an LCD screen… and that’s pretty much it. It’s essentially a digital typewriter in almost the purest sense.

Lest this sound like a sponsored or promotional post: the AlphaSmart Neo was released by Renaissance Learning way back in 2004. And it was discontinued in 2013. So this is not a new product – it’s in the same generation as the robust “brick phones” of the early noughties.

I bought mine secondhand from eBay a few weeks ago and I’ve been trying it in a variety of ways since then.

Unlike a laptop, there are no distractions. It doesn’t connect to the Internet. There are some basic “applets” on it but these mainly seem to be for typing practice or classroom use.

Otherwise, as a personal device, it’s designed for writing on the go.

The keyboard has an easy but responsive feel to it. It’s pleasant to use.

The screen is an LCD one and it’s not backlit, so you need some form of light to read on it. But the text on the screen can easily be seen in daylight. You can see up to six lines of text on it at once.

I’ve been enjoying writing on it both indoors and out. 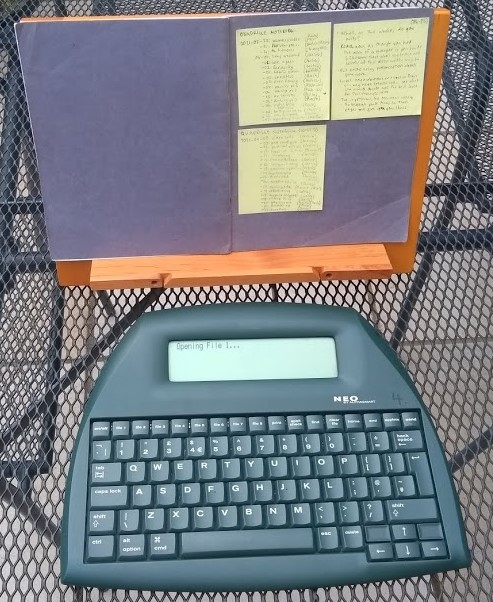 If you like literally writing on the go, it works well for that too.

I used it on trains up to Banbury and Birmingham recently. With a regular laptop, the fold-down table on the back of the seat in front of you is not normally enough space for opening the screen fully and typing. But for the AlphaSmart Neo, even the confines of a British train are okay. 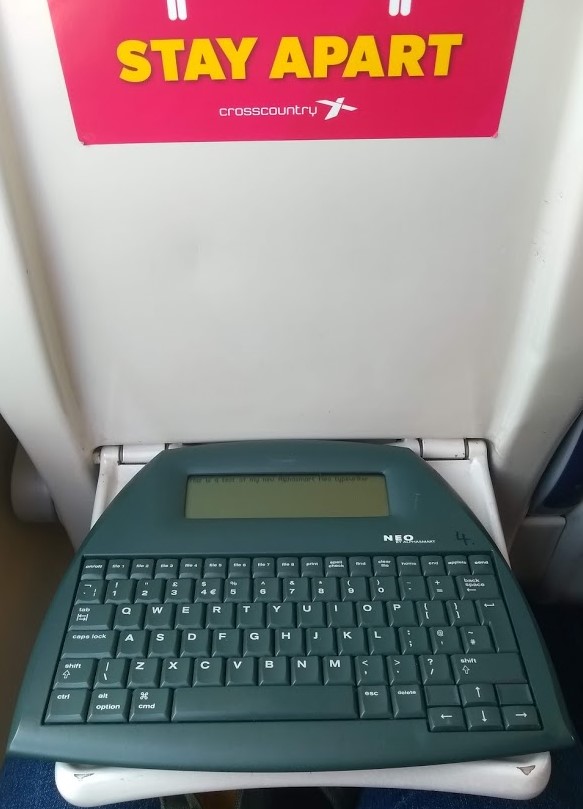 Social distancing means at the moment nobody has to worry too much about sitting next to a stranger on a train – but even if I had to, I’d feel comfortable typing away as the screen’s small size and low angle make watching over the shoulder less likely.

The only uncomfortable part of the experience for me on either trip was the need to wear a facemask.

In short, the AlphaSmart Neo is great for getting ideas down, getting into a writing flow, and very light editing.

It isn’t great for viewing a document or text in its entirety or getting a sense of structure, but that doesn’t feel like its purpose. In fact, I find these limitations to be a virtue: they enforce a distinction between two often muddled activities – writing and editing.

If you need to get a rough, first draft of something hammered out, then I’d argue having a distraction-free keyboard which only shows you a small portion of what you’re working on at a time is perfect.

You get eight files, each with a dedicated button on the keyboard.

At regular intervals, I connect the AlphaSmart Neo to my PC or laptop with a USB A/B cable to back up each of these files and edit or refine what’s in them further on the comfort of a larger screen. 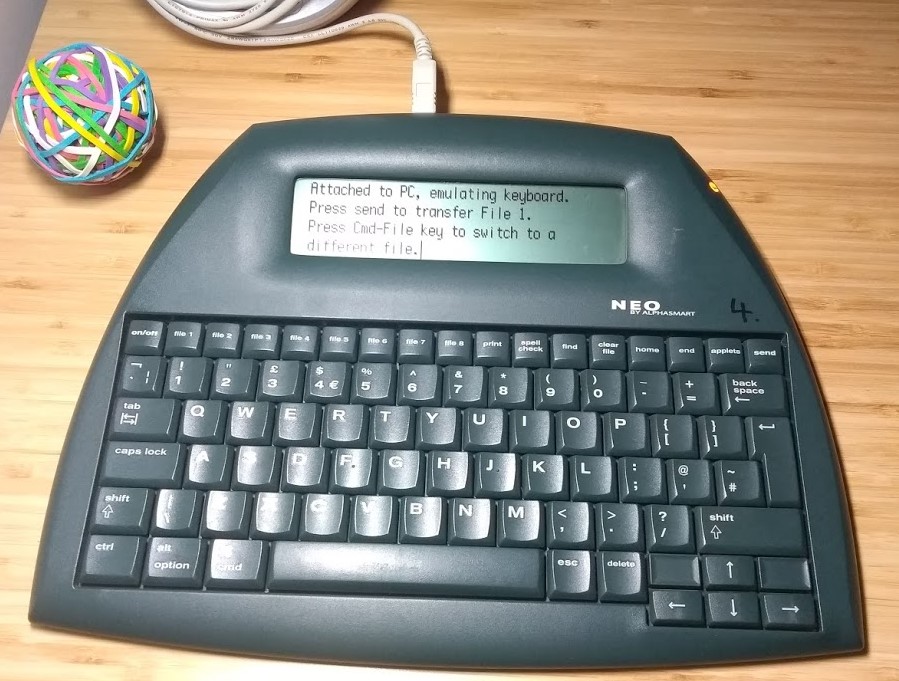 Once plugged in, the screen shows a message and the AlphaSmart Neo essentially becomes a wired keyboard, but with one key difference (pun not originally intended, but I’ll go with it): you can switch between files you’ve written into and hit a “Send” key. This will repeat all the keystrokes you made in the file. So you can open a text editor, focus on that, hit “Send” and watch all the text you wrote earlier unfurl in your chose editor.

Once you’ve backed up a file or decided you don’t need them, you can hit “Clear file” to wipe it.

Watching your work retyped on your machine can be satisfying to watch at first. But it can be time-consuming for longer files. Fortunately, there’s a quicker way.

Setting up a better workflow

I installed “NEO Manager” software on my PC to grab the files directly from the machine. All the software is still available on Renaissance Learning’s manuals and downloads page

Unfortunately, the software I installed wouldn’t recognise my device as being plugged in at first. I tried the UK version of the software initially but when that didn’t work I tried installing the US version of Neo Manager instead. This was the hardest part. Luckily, there’s a community of AlphaSmart users on Flickr. Following a recent post on how to get Neo Manager 3.9 working on Windows 10 got it working for me.

Once I had a connection I could reset the AlphaSmart Neo, update the software on it to the most recent version (3.14), and also set the keyboard to my preferred Dvorak configuration. 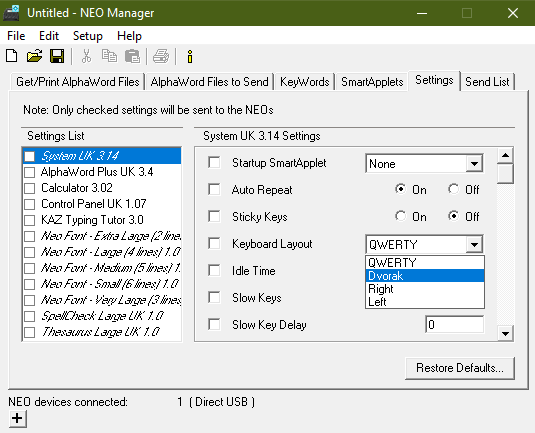 After a couple of evenings of reading around and trying different things, I can now easily grab any file I’ve been working on and just copy and paste what I need into the latest files on my PC for backing up.

I’m interested to see if I can also back up work on the go rather than waiting until I’m at my PC to do so. I found a post about plugging the AlphaSmart Neo into a smartphone to do just that. But my old Wileyfox phone does not have OTG (on-the-go) capability, so that experiment will have to wait until I get a new smartphone.

Why bother with all this?

I first heard of this device in a tweet by Emanuel Derman through Edward Tufte’s retweeting of it. Through that I found an article about “analog” focus on the fascinating blog Why Is This Interesting.

As usual, I did an excessive amount of reading around before I committed to buying my device. There are a few different options. I read a Reddit thread on Neo compared with the Neo 2, a Flickr group post on Neo compared with the Neo 2, and a post on the blog No Wasted Ink blog, comparing three types of AlphaSmart. I was tempted by the Neo 2, since it was the one I’d first read about, and an Input magazine review describing AlphaSmart Neo 2 as the “best writing tool” the author had ever known in particular got my attention. But it was easier and cheaper to get hold of the Neo model on eBay and that’s been fine so far. The main difference seems to be the amount of space or memory on it.

Generally, I’ve always been interested in analogue as well as digital technology for realising creative processes.

Nowadays, the term technology is equated with the digital. […] In other words, our understanding of the term technology does not capture the range of human-made artefacts that exist in the world at any particular time nor the innovations that have been made at any particular time. […] Our world is not one where a certain kind of material formation is entirely replaced by another. […]. Instead, we have a process of accumulation. That’s to say we have layer upon layer of technological history in our present.

It’s easy to forget that, to name a few examples, index cards, the Biro pen (or any pen), the Post-It note are all forms of technology even though we take them for granted. They may not be the scalable forms of tools we’ve become accustomed to thinking of as “technology” but they are still technology nonetheless.

And sometimes the limitations of older technology are a help rather than a hindrance.

I know when I’m sitting at my AlphaSmart Neo that I’m there for a specific activity since that’s what the tool is dedicated for, unlike my multi-purpose laptop, PC, or smartphone. In that sense, it’s closer to the experience of sitting down with pen and paper or what I imagine people might feel when they sit at a typewriter. But, unlike those older technologies, I have the advantange of knowing that what I write on the AlphaSmart is instantly digitised, and therefore uploadable, searchable and versionable.

Previous post: « Looking back on headless prototyping with GatherContent